When it comes to cooling your GPU, usually the regular way to go is with an air cooler. There are a few exceptions with GPUs that come with liquid cooling, but air cooling is oftentimes utilized. But what if your GPU is running hot? Well, you need something like the best AIO GPU cooler.

Wait, let’s back that up for a moment. AIO coolers are usually reserved for CPUs, so why would you use a GPU AIO water cooler? Well, some GPUs are known to run hot, which does somewhat decrease the durability of the components on the GPU itself. This is especially true if you’ve got a case with subpar airflow, as not enough cold air will reach the GPU.

A GPU AIO water cooler is the perfect solution for this, as it allows your GPU to reap the benefits of liquid cooling – quieter operation, lower temperatures, and longer life expectancy. With that in mind, let’s take a look at a couple of options, and see how things work in this regard. In the end, you’ll know what the best AIO GPU cooler is. 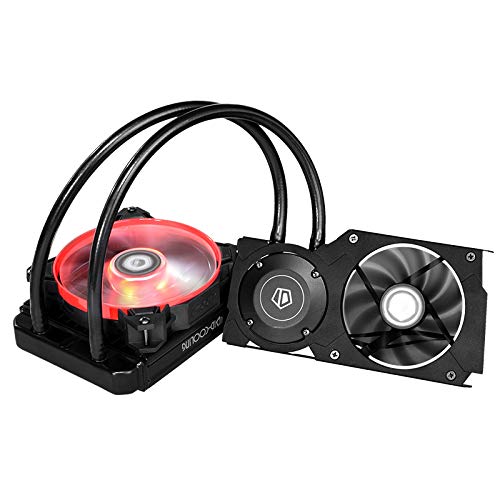 ID-Cooling’s FROSTFLOW 120 is an easy way to add liquid cooling to any modern GPU.

Adding liquid cooling to your GPU might sound like a complicated thing to do, but ID-Cooling has made sure to make this as easy as possible. The FROSTFLOW 120 comes with a complete AIO setup, and all that’s left for you to do is remove your GPU’s current cooling solution, and replace it with this.

Now, things, unfortunately, aren’t all that simple, as there are a few extra things you’ll want to keep an eye out for. First, compatibility is somewhat limited. To use the FROSTFLOW 120, you will need an Nvidia GTX 1070 or 1080, or an RTX 2070, 2080, or 2080 Ti. If you’re using an AMD GPU, the AIO works with the 5700 and 5700 XT. You’ll notice that these are all higher-end models, that tend to run hot in certain environments, which is why ID-Cooling has ensured compatibility there first.

The AIO comes with a 120mm fan on the radiator that’s optimized to push as much air as possible, and reduce the temperature of the liquid inside the radiator. Unfortunately, there is no reinforced tubing, so you’ll have to be a bit careful in terms of bending so you don’t damage them. At this price point, this isn’t too surprising, honestly.

Right next to the pump, on the bracket that mounts on the GPU itself, is a 92mm fan that cools down the GPU VRM and memory. And here is where you find another neat thing about the FROSTFLOW 120 – both fans are very quiet, and when you aren’t pushing your GPU hard, you’ll get a rather quiet operation.

Now, while this isn’t the best way to add liquid cooling to your GPU (more on that in a minute), it’s the most convenient one, provided you have a supported GPU. The FROSTFLOW 120 is the best AIO GPU cooler if you don’t want to be bothered with DIY solutions, or even worse, custom water cooling loops. 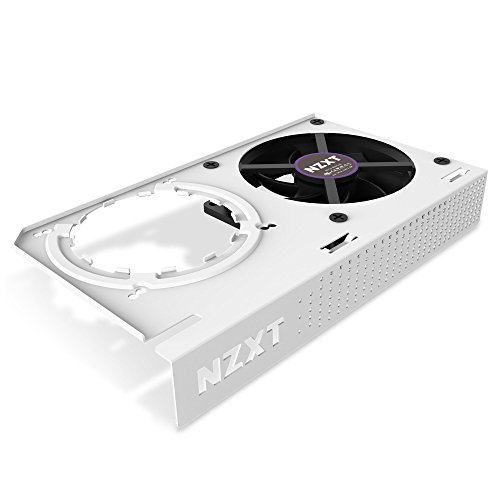 NZXT’s Kraken X lineup is one of the most commonly used AIO coolers out there. They’re expensive, yes, but they perform better than the competition, and they come with excellent quality which means a Kraken AIO might just outlast your CPU. But that’s what their problem is – they’re made for CPUs. Well, this is where the Kraken G12 comes in.

The Kraken G12 is a bracket that allows you to use just about any Kraken X series AIO, on a wide variety of GPU models. We’re talking about mid-range and high-end GPUs from both AMD and Nvidia, and you can also use Corsair, Thermaltake, Antec, or Zalman AIOs, but we’ll discuss compatibility a bit later.

The bracket does require that you remove your GPU’s current thermal solution, whether that’s a fan or two (or three), or something else, and it comes with an easy installation method, too. To add to this, once you install it and set it up, it does look rather nice, too, especially in the bright white color.

There are two halves to the Kraken G12. One of them is a hole, which is where you’ll install the AIO. The other one houses a 92mm fan, which basically provides active cooling for your GPU’s VRM and memory. It’s nice to see NZXT thought of this because most GPUs do have cooling here, so you aren’t neglecting it.

There is also a pretty neat AIO that we’d recommend with this bracket, and it’s the NZXT Kraken X63.

The X63 is usually the go-to AIO for CPU cooling because it comes with a rather neat balance between price and performance. It has two of NZXT’s AER P static pressure optimized fans, which keep the temperature rather reasonable, even under load. They’re the 140mm variant, so take note of your case’s compatibility.

With the X63, you get a compact pump that still has NZXT’s rotating Infinity Mirror design, so you can position the logo just right regardless of the orientation of the pump itself. The reinforced tubing adds a lot of durability and quality and keeps everything lasting a bit longer.

Last but not least, the integration with NZXT’s CAM software means that you can control and fine-tune everything about the AIO, as much as you want to.

How to install the NZXT Kraken G12?

The mention of liquid cooling and AIO might sound scary to some, but the ease of installation is one of the reasons why this is the best AIO GPU cooler.

The first thing you’ll want to do is remove your GPU’s current cooling solution. Make sure you take things slow in order not to damage anything. Remove the fan cables as well, and be careful not to rip them. Once you’ve done this, grab the Kraken G12 bracket, and install the 92mm fan that cools the VRM and memory. Install it using the screws included, and make sure the label faces the GPU bracket. See which corner the cables exit from, and see what works best for cable management.

There are two foam pieces that you should install on the corners, so check and see where you can install them, without them interfering with any of the GPU’s components. As we mentioned, there’s excellent compatibility with GPUs here, so the next step is to identify which of the retention brackets you’ll be using for your specific GPU.

The next step is to attach the pump to the bracket. Make sure that the tubes’ orientation allows you to guide them along the side, using the cable tie points. Pass the pump through the bracket, and rotate it until it aligns with the GPU brackets, and attach it.

There are included screws with springs to help keep things level, so use them to attach the bracket itself to the GPU. Before you turn it on for testing, make sure that the AIO’s fans are connected to your motherboard (or fan controller) headers, and are operational. At this point, you should be ready to go, but check the AIO’s instructions and see whether you’ll need to do anything extra.

As we mentioned, one of the Kraken G12’s main selling points is the fact that it’s compatible with a massive amount of GPUs. The only two GPUs that are explicitly not compatible, are Nvidia’s RTX 2060, and AMD’s RX Vega 64.

Apart from that, here’s a list of GPUs from Nvidia and AMD that will work with the Kraken G12 and AIO coolers:

A few things to note here. First, the compatible RTX GPUs will use the “A” brackets for mounting. Next, for some GPUs like the 2080 Ti, only the reference-based designs are supported. There are also some GPUs where only the long PCB variant is supported, due to the placement of the PCIe power connectors. And last but not least, there are some variations in AMD’s die height, which might require you to use a copper shim that isn’t included.

The Kraken G12 bracket is compatible with a variety of AIOs, and not just NZXT’s own, but options from Thermaltake, Corsair, Antec, and Zalman, too, and here’s a full compatibility list:

At the end of the day, there are a couple of very good reasons to want to go with AIO cooling on your GPU. And if that’s something you’d like to do, we just discussed two excellent ways to do so. Whether you go for ID-Cooling’s done deal FROSTFLOW 120, or you choose NZXT’s Kraken G12 bracket and a suitable AIO, you’ll get reduced temperatures, a quieter system, and better overall durability.