After eight long and embarrassing months, we are finally leaving behind the unintended nuclear disaster that is the i9 11900K. In its stead, Alder Lake finally brings in what we can truly consider as recommendations, namely the best Intel Core i9-12900K prebuilt gaming PCs, to which system integrators no longer have to ship pre-throttled versions in the off-chance that gamers will use them for more than personal entertainment.

Well… you do brace yourselves for a hefty premium to get the best, though. But hey, you’re not exactly looking for a Core i9 CPU if you have nothing to splurge, right?

Performance – Even with a Core i9 CPU, you shouldn’t exactly expect the best GPU to always be paired with it. Though, anything above an RTX 3070 / RX 6700 XT is already well worth their potential in gaming performance. No need to worry about individual cooling, since the components are all off-shelf. Without the choice to get your own case as a custom PC, though, the prebuilt does potentially suffer from sub-optimal airflow configurations.

Cost – for the traditional downside, however, prebuilt PCs require overhead costs to pay for the PC being built (and sent directly) to its potential users/customers. This is especially the case with Core i9 builds, where the total price could easily skyrocket the more parts are shoved into the system unnecessarily by the system integrator. Even worse, prices today have leveled in a way that simply availing high-end prebuilts for their package value is no longer effective.

Inferior CPU cooling solution – double check if the cooling solution is robust enough. For the Core i9 12900K, it should either be a push-pull double 120mm tower cooler, or (at minimum) a 240-rad AIO cooler.

Single-channel memory –it’s been shown and proven time again, that both SI and OEM prebuilts often cut costs by using only one stick of RAM (1x 16GB) instead of two (x2 8GB). Even if Core i9 prebuilts can typically be offered at 32GB, still make sure that the prebuilt you’re getting has at least two sticks, inserted alternately in two slots if the motherboard is using four DIMM slots.

Non-optimal case cooling – so long as the front is a considerably flow-free mesh panel (or top of the intake direction is from above), you shouldn’t have any significant problems with airflow (and thus adequate cooling).

Questionable power supply – most likely not a problem with a Core i9 prebuilt, but do still check just in case the brand and model just in case.

Bloatware – SI-built systems are much less likely to have too much bloatware. That being said, it is quite recommended to (re)do a fresh reinstall of Windows if possible.

Long story short, if you are looking for a huge performance difference… you won’t. So stick to DDR4 for the next five or so years. But as a high-end prebuilt using a current-generation flagship CPU, do consider DDR5 if you are planning to reserve those DIMM slots for better DDR5 sticks in the near future. 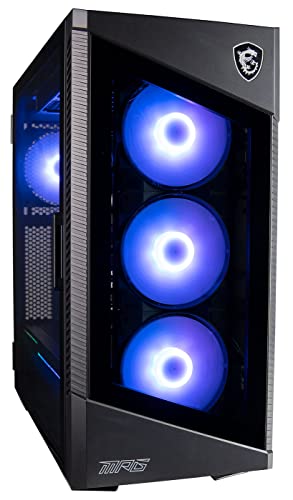 With a generous level of 4K/1440p gaming performance and good storage configuration, it lives up quite well to its advertised design… almost.

This specific i9 12900KF prebuilt “bores” us with a well-designed setup with a complete installation of fans and good component orientation. Nothing really notable to complain about here. However, we do kind of lament the consistent use of solid front panels that only use open side meshes as intakes. This considerably reduces the overall thermal control potential of the case, at the cost of simply looking stylish.

Thankfully, even for the Alder Lake flagship, there are no immediate sources of thermal throttling for this case. Perfect power delivery with multiple CPU power connectors, nice VRMs (and heatsinks), plus the use of a heftier (MSI) RTX 3070 GPU. Users can pretty much open any game, and start playing modern triple-A games without ever having to worry about settings.

Storage options are, oddly quite basic. Well, we do have the generous 32GB RAM for Skylines freaks and KSP super modders. But the 500GB boot drive SSD + 2TB HDD is a tad bit strange for what is supposed to be a high-end prebuilt. Ah well, what could go wrong with just slapping another game-focused NVMe SSD to it?

When ordering this particular prebuilt, please be wary that there are two types of AIO configurations available. The first is the one described here, using a 240-rad AIO, usually installed at the top panel. The less optimal one uses a smaller 120-rad AIO, which is definitely not as recommended for the i9 12900K. Be sure to order the 240-rad one and not the 120-rad one. 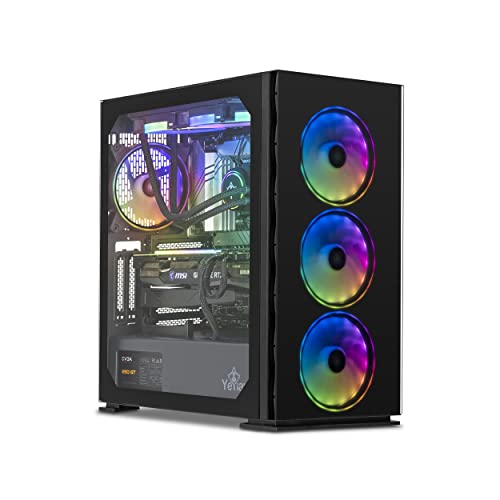 A taste of DDR5 smashed with other top-of-the-line components, this one is as effectively high-end as you can get without suffering too much from system integrator costs.

Ah yes, YEYIAN is pretty much being YEYIAN as usual with its combination of a very flashy prebuilt design while offering otherwise stable thermals and somewhat optimized hardware combinations. Don’t let that exorbitant-looking price tag fool you though. Because it is… *drum roll*, actually priced almost the same as a similarly specced custom PC! That alone probably already makes this prebuilt our top recommended in this list.

However, it managed to impress us even more with its very practical high-end component choices. It ups the ante to the pair-worthy RTX 3080, which is honestly a much better pairing for the i9 12900K. Maybe overkill for 1440p at this point, but it unleashes the high-level multitasking fury of what competitive streamers can do with their builds, in-game settings be completely damned.

Finally, for those with futureproofing in mind, the Yari X21 also features a DDR5-compatible motherboard (chucked with two sticks of 16GB RAM by default). In case DDR5 gets a massive boost in performance one or two years down the line, you still have plenty of upgrade room to spare.

CyberpowerPC is insistent on making its new Core i9 home as warm and as cozy as possible. Maybe a bit too warm.

CYBERPOWERPC has consistently provided good materials (both physical and online) for guiding new users in setting up connections and turning on their PCs. May seem condescending for tech-savvy customers, but you need to understand the market where its products are introduced. That being said the build quality is pretty much what you’d expect: triple 120mm fans on a suffocating side-mesh, base-level ATX case, very optimized cable management, and a stable selection of GPU and motherboard. No overclocking (not recommended) for this particular system though, since it’s using a 120-rad AIO cooler.

On the gaming performance side, it’s perhaps simple a warmer (but not throttled down!) version of what the CUK Aegis R can do: set-and-forget 1440p gaming, and optimized 4K gaming. You do get the rather unimpressive (for this prebuilt’s tier) 16GB RAM. But if properly confirmed to be configured as dual-channel, it’s still far more than enough for almost all games that the un-bottlenecked RTX 3070 can deal with.

Unlike the CUK Aegis R, though, this Gamer Extreme VR at least provides us with 1TB of SSD space, which helps add more of those drive-space-intensive games on the primetime walkthrough list. It is only one drive though, so no HDD archiving out-of-the-box.

The advertisement for this specific prebuilt also strangely pushes it hard as a VR-optimized PC. Which is technically true, but just feels a bit weird in 2021. Port-wise though, you’ll probably have a fair bit of trouble setting up any Oculus Rift headset with it. Oh, and its logo-slapped default mouse and keyboard are actually fairly usable, so there’s also that.