Though some users don’t mind a larger sized gaming PC, a mini gaming PC is a much more attractive pick for others. The fact that you can get the same amount of computing performance in a more compact and portable case is an interesting proposition. As a result, we have curated a list of the best mini gaming PCs currently on the market.

Moreover, these small form factor PCs are already prebuilt built. Which provides the added convenience of not having to spend hours building and possibly damaging your PC’s components. These mini PCs will also perform very well in gaming, video editing,  and other computationally demanding tasks.

If you’re looking for an absolute beast of a mini gaming PC, the CUK Stratos Mini is one of the best possible options out there. It’s a compact build that checks all the boxes and performs admirably in just about any scenario.

Powered by an eight-core Intel Core i9-9900KF CPU, which is paired with Nvidia’s flagship RTX 2080 Ti graphics card, this PC can handle anything you can throw at it. It also comes with 32GB of DDR4 RAM, as well as two SSDs. One of them is an NVMe drive, with a 1TB capacity, while the other is a regular HDD, with a 2TB capacity.

And it’s not all about performance either, the Stratos looks really nice, too. There’s a tempered glass side panel on the side and front, and you can easily see the components. If you’re after a good looking mini ITX gaming PC that looks nice and doesn’t compromise in terms of performance, this is it. When you’re looking for the smallest possible mini gaming PC, many people actually dismiss the possibility of a NUC. They’re seen as insufficient – but that’s not the case with the SimplyNUC Ghost Canyon. Even though very compact, it comes in a couple of configurations that will satisfy everyone’s needs.

There are also three GPU options – GTX 1660, RTX 2060, and RTX 2070, and each of them is pretty capable as a gaming GPU. The only downside to the Ghost Canyon is the fact that you’ll be using mobile CPUs instead of their full-fledged desktop solutions. However, the processors that you can choose from are all pretty capable, and you can use the Ghost Canyon as a mini gaming PC if you’re limited in terms of space.

The Corsair One system made a lot of noise when it was introduced, and for good reason. Available in a variety of configurations for various budgets, this mini gaming PC is a very, very capable gaming machine that doesn’t take up a lot of space on your desk.

Inside it is an Intel Core i9-9900K processor that can boost up to 5.0GHz when necessary. It’s an eight-core beast capable of handling just about anything. It’s also paired with an Nvidia GeForce RTX 2080 Ti, a graphics card with 11GB of memory that’s pretty much the best there is for gaming.

Alongside the CPU and GPU, you’re looking at 32GB of RAM which is more than plenty for multitasking, as well as dual storage. You have both a 1TB m.2 SSD, as well as a 2TB hard drive if you need more storage.

Last but not least, the case does come with customizable RGB lights and is overall a pretty neat compact solution for just about anyone who wants a gaming PC in a mini ITX form factor.

Even though the Skytech Chronos Mini does come in a few configurations, this one is an excellent budget pick for people who don’t want to spend too much. It comes with a quad-core CPU and a decent graphics card, making it a versatile pick for both gaming and work.

At the core is an AMD Ryzen 3 3100 CPU, with four cores and a base frequency of 3.6GHz. Alongside it, responsible for gaming and visuals, is Nvidia’s GeForce GTX 1650 Super 4GB. This is all finished off with 8GB of RAM and a decent 500GB SSD.

Looks-wise, the Chronos Mini looks pretty good. The mesh front panel allows for plenty of airflow, and the inclusion of ARGB fans adds a splash of color, too. Overall, this is an excellent budget build for users who don’t want to spend too much on their mini gaming PC. 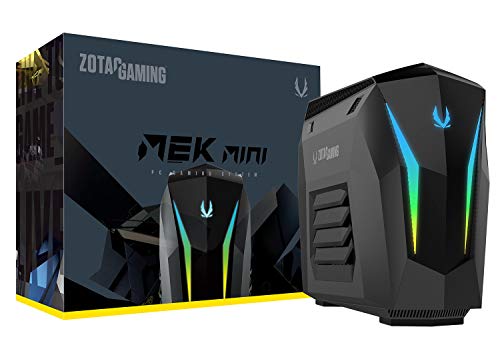 While you may know of Zotac as a GPU partner brand, they also have the Mek Mini, which is a very compact yet powerful gaming PC. In a very small package, you get a great CPU and one of Zotac’s own variations of the RTX 2070 Super.

The CPU in question is Intel’s Core i7-9700, which even though locked, can turbo up to 4.7GHz, which is quite a bit for many. The RTX 2070 Super is a great pairing for high refresh rate gaming, making this a great combination. You get 16GB of RAM as well, which should be enough for multitasking. What we aren’t really fans of is that the SSD is only 240GB. Yes, you do have a 2TB hard drive, but a larger SSD would’ve been nice.

If you don’t mind that, though, you’re still looking at a very compact air-cooled PC that comes with Windows 10 out of the box and runs rather well in a variety of scenarios. 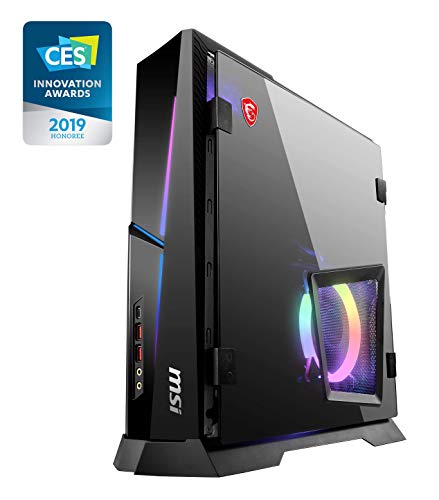 When it comes to small, compact gaming PCs, MSI has been at it for a good while now. The Trident X Plus is an excellent example of high-end performance packed in a compact build that works very nice.

Inside it is the Intel Core i9-9900KF, which is actually an i9-9900K, without an integrated graphics card. With a base clock of 3.6GHz and a maximum boost of up to 5GHz, this is a very powerful CPU. Add to it the RTX 2080 Super graphics card by Nvidia, and gaming performance is excellent.

Memory is well taken care of in any regard. There’s 16GB of RAM, as well as a 1TB SSD and a 2TB hard drive, so you can have quite a lot of games on it, as well as a lot of room for multimedia.

To top it all off, the case does look very interesting, too, and it has RGB lights that are pretty eye-catching. Overall, it’s a great mini ITX system. 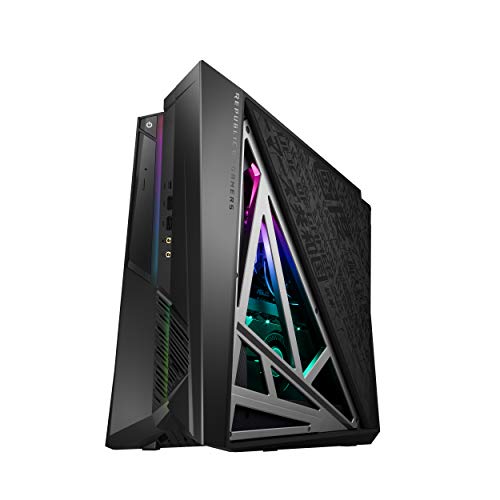 Even though they’re certainly more well known for their gaming laptops, ASUS has a few nice desktops as part of their Republic of Gamers lineup, too. One of the best mini PC for gaming options here is the Huracan G21, a compact build that’s packed with power.

At the core (pun intended) you have an Intel Core i9-9900K processor that sits at 3.6GHz but can turbo up to 5.0GHz when necessary. It’s paired with 32GB of DDR4 RAM, as well as Nvidia’s RTX 2080 graphics card with 8GB of video memory. The performance here is impeccable, and you can game at just about any resolution and still get respectable details.

The 1TB NVMe SSD will give you plenty of fast storage, so you can have your apps and games load quickly and without much waiting. And the icing on the cake is the case, it has a very modern, futuristic design, and looks just stunning. 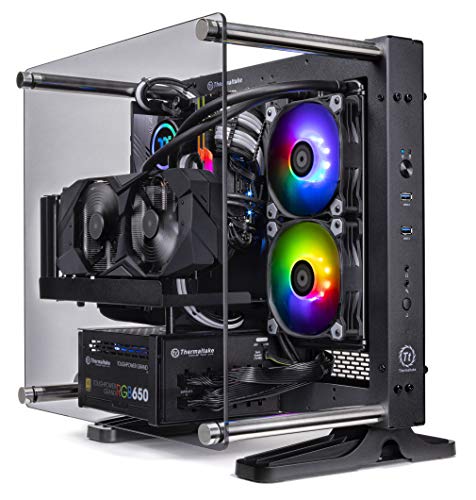 Not everyone who wants a mini gaming PC is extremely limited with space – some people do have a bit more room. If that sounds like you, the Thermaltake LCGS P-101 is an excellent build for you. It not only performs really well, but it also looks stunning.

Inside is an AMD Ryzen 5 3600X processor that’s water-cooled with an AiO cooler. This is a six-core CPU that’s extremely capable as a gaming CPU, and it’s paired with an RTX 2060 graphics card, one that performs pretty well in many scenarios. You won’t be playing AAA titles at 4K with ultra settings, but it does the job rather well. Aside from this, inside you get 16GB of RAM, as well as a pretty big 1TB m.2 SSD for all your games and software.

The main selling point of this PC is arguably the case itself – it’s an open case where you can easily see all the components, and with a bit of RGB, it looks nice. If you don’t mind cleaning it pretty often, it’s a great choice. 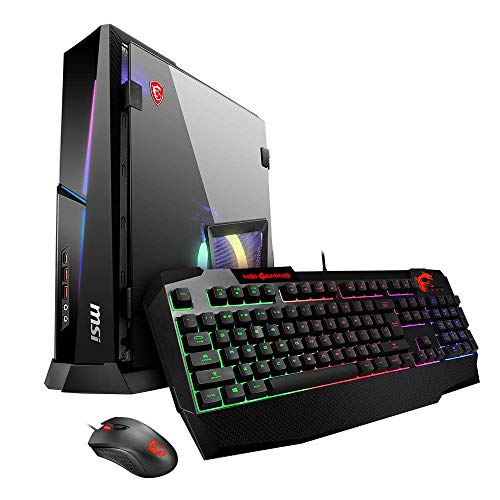 MSI’s Trident series of gaming desktops are pretty attractive as options. You’re looking at fairly compact systems that look nice, and cover just about any use case in terms of performance. The Trident X is not top of the range, but it’s pretty respectable in any regard.

First things first, this is a small form factor PC that has an Intel Core i7-9700K 8-core processor. It runs at 3.6GHz, but can turbo up to 4.9GHz which is pretty decent. There’s also Nvidia’s RTX 2070 Armor graphics card with 8GB of memory and ray tracing technology, as well as 16GB of RAM and a 512GB NVMe SSD.

All things considered, the Trident X is a pretty well-balanced system in terms of both performance and looks. The case looks rather nice, and there are a bit of RGB lights in it as well, to make it pop a bit more. If you don’t need the highest-end possible, this is a great pick. 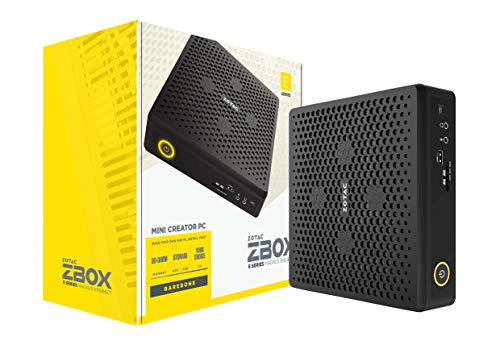 Getting a barebones system that’s extremely close in size to a NUC is a great way to save a few bucks, and work with limited space. The ZOTAC Magnus is a great pick, and even though it comes in various configurations, we’ll be looking at the one higher-end versions.

You also get a full-size ZOTAC GAMING GeForce RTX 2070 SUPER 8GB desktop graphics card, which should be more than enough for modern graphically demanding gaming titles. This includes the latest AAA gaming titles, which is something to be expected at this price point.

There is no memory or storage with this system, which means you’ll need to provide your own SSD (and HDD, if necessary), as well as RAM. If this is something you don’t have a problem with, by all means, go for the Magnus – it’s a great choice for many users.