Intel recently, with the launch of its 10th gen lineup of processors, decided to update socket compatibility with the LGA 1200 socket. Unfortunately, this means that you will have to purchase a new 400 series motherboard if you are planning on upgrading from an older Intel build. Luckily, if you are in the market for an mITX board, we have reviewed the best Z490 Mini ITX motherboards to go with your Intel 10th gen processor.

The mITX form factor motherboard is excellent if you want to go with an ITX build, pairing it up with cases like NZXT’s H200i or the Thermaltake Core V1. Otherwise, we highly recommend going with the much cheaper mATX form factor motherboards and use the money elsewhere on your build. Going ITX also means higher temperatures, so it would be better if you went with liquid cooling at least the CPU. Higher temperatures also mean that you would need a highly capable motherboard if you even think of overclocking your CPU.

A typical indicator of a good motherboard is the number of VRM power phases. A VRM or Voltage Regulator Module is what controls the amount of power supplied to your CPU. A higher number of stages means greater control over the power provided, implying better overclocking, lesser temperatures land more stable systems.

Many motherboards also incorporate heatsinks to cool the VRM and use higher quality chokes and capacitors to ensure longevity and lower failure rates. Also, make sure that the board has at least one M.2 slot for installing faster storage and saving space in the build. Please continue reading for our recommendations on the best motherboards for your build. 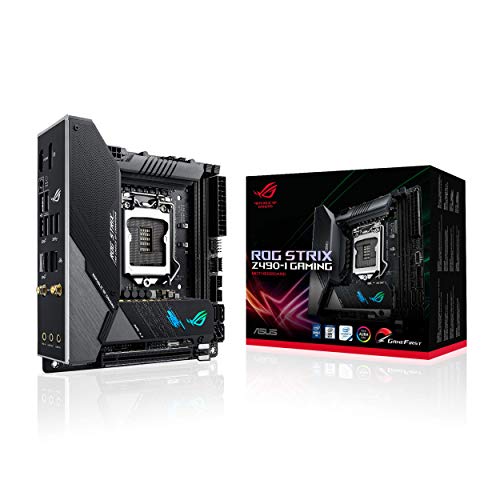 ASUS’s premium offering, the ASUS ROG Strix Z490-I Gaming WiFi edition, is the most expensive mITX board in our list coming in at $300. At this price, you get a host of features for such a small factor. The 8+2 configuration of VRM power stages will ensure system stability and unlocks overclocking capabilities. However, you might not want to push too hard as being an mITX board; the number of stages had to be lower than usual. The WiFi 6, along with included antennas and the 2.5 Gigabit ethernet, will allow for high-speed networking, and the four USB 3.2 Gen 2 ports will allow for quick data transfer rates.

Although there are two RAM slots, the ability of them to support 32 GB RAM sticks is an excellent option. Also, being able to overclock the motherboard to support higher CPU and RAM speeds is made much more comfortable with ASUS’s exceptional UEFI BIOS and has multiple customization modes. The motherboard also has excellent thermals with a Heatpipe running from the VRM heatsink to a mini fan. The M.2 slots also stack on top of each with a triple layer Heatsink for significantly lower temperatures.

The ASUS ROG Strix Z490-I Gaming WiFi is an excellent motherboard option for going with the K series i7 or i9 intel 10th gen processors and can even handle a bit of overclocking. Just keep in mind to include a suitable liquid cooler for the CPU. 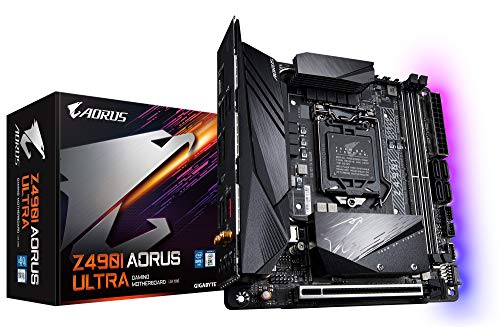 Gigabyte offers a respectable motherboard for a price of $270, especially considering their inclusion of WiFi 6 and PCIe 4.0 hardware support. As for the power delivery system, the board employs the use of an 8 phase power design, which is the standard for most motherboards with high-quality chokes and capacitors. To keep temperatures low, the VRM’s and M.2 slots have heatsinks connected with the help of a Heatpipe, and a thermal baseplate keeps the entire board cooler.

As for connectivity, the WiFi 6 and 2.5 Gigabit ethernet can handle high-speed connectivity while the two USB 3.1 gen2 ports on the rear enable fast data transfer while the HDMI 2.0 is a great inclusion. As far as RAM goes, the board supports speeds up to 5000Mhz with the XMP profile. Reinforced slots for RAM and PCIe devices make for more durability, which is a good thing. BIOS support for overclocking is also great, and the Q-Flash Plus CPU-less flashing option is a handy bonus feature.

The Z490I AORUS Ultra is an excellent value mITX motherboard with features as much as ASUS’s Strix offering, except for the added fan. It is a great choice to pair with the K Series i7 and, to an extent, the i9 10th gen Intel processor, though keep in mind that your overclocking mileage may vary. The ASRock Z490 Phantom is a feature-rich motherboard coming between the previous two motherboards at a $280 price tag. What makes this motherboard stand out is the inclusion of a Thunderbolt 3 port for transfer speeds of up to 40Gbps. It comes with a 9 phase VRM complete with a heatsink and in-built fan for lower temperatures and increased performance. Also, ASRock’s Base Frequency or BFB technology helps squeeze out more performance from non-K series Intel processors by increasing the base clock at the cost of higher temperatures. It includes WiFi 6, 2.5 Gigabit Ethernet, and 3 USB 3.2 Gen2 connections for fast data transfer. It supports 2 RAM sticks up to 64 GB and 4666MHz. The M.2 slots have a Heatpipe connecting them to the fan for wicking off excess heat.

The BIOS supports a variety of overclocking features and has various adjustments. The motherboard also has a reinforced PCIe slot for additional durability. Overall, the Z490 Phantom is an excellent buy if you need a fan for motherboard cooling and Thunderbolt support in case you want to build a portable PC. The recommended CPU’s are the same as our first choice: K series i7 or i9 intel 10th gen processors.

If you are looking for a cheap mITX motherboard to go with your budget build, look no further than the ASRock Z490M-ITX. At $160, it serves as a great partner to the non-K series Intel 10th gen processors, especially due to the BFB Technology, as mentioned earlier, which enables them to run at higher base speeds. The 7 Phase VRM will not serve much in terms of overclocking but should serve well in terms of keeping the system stable. The standard 802.11ac WiFi and the Dragon 2.5G Ethernet should be enough for your daily needs while the 4 USB 3.2 Gen 2 ports should allow for fast connectivity. Another thing to note is that the VRM cooling solution is absent while the M.2 connectors have a covering to keep lower temperatures, and the reinforced PCIe slot provides some durability. The board also supports RAM up to 4400MHz and a capacity of 64GB.

The ASRock Z490M-ITX is an mITX motherboard that works for the form factors but does not offer enough overclocking capabilities. It goes best with the non-K i5 and i7 lineup of Intel 10th gen processors, which do not even need liquid cooling, saving even more money. A better option at this price range would be to skip ITX altogether and see other options as a good motherboard if you want to consider performance over form.