With the release of Intel’s Raptor Lake processors, DDR5 memory has become more relevant than ever for the 13th Gen processors when compared to the 12th Gen largely due to its considerable decrease in cost and availability. However, if you are building a PC Specifically with the Core i5-13600K, it is imperative you choose the right memory configuration based not just on performance and visuals, but also on value and cost.

This is because the i5-13600K supports both DDR5 5600 and DDR4 3200 MHz memory with a maximum memory capacity of 128GB. Therefore, in this article, we will go into great detail about the best Ram to pair with Intel’s Core i5-13600K CPU and how to choose the right configuration based on your computational needs. Also, keep in mind that Intel’s XMP 3.0 memory overclocking profiles will allow you to take advantage of your chosen RAM kits for improved performance. 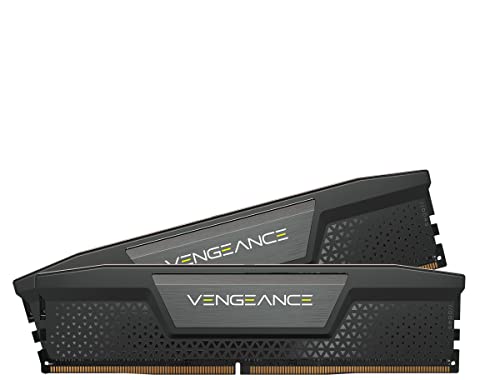 Corsair Vengeance is a simple pair of memory modules built for stability and reliability, for systems that require easy plug-and-play usability.

The 5,600Mhz rated frequency of this RAM kit is the standard of what Raptor Lake supports for DDR5, as you don’t really need anything else if you simply want a good set of reliable memory modules for the i5 13600k in terms of value to performance. This makes the Corsair Vengeance ideal for the i5-13600K as it competes head-to-head with negligible losses using its cheaper price to set better cost-to-performance values when compared to other DDR5 memory modules.

The added perk of this RAM kit is that users still have a bit of overclocking headroom to increase its performance value even further with XMP. Not exactly to produce significant gains, but mostly for optimization purposes, bumping your CPU’s multitasking potential, even if just for a tiny bit.

The overall visual design of this Ram kit is a much-needed improvement over its DDR4 counterpart. Its heat spreader design is a bit more sophisticated than others, but nonetheless still basic and linear, representing its product tier very well. At the very least, it serves its purpose for thermal control very well. Don’t mind its thin profile, as it does its job dutifully even when it’s going well outside its intended tuning profiles. 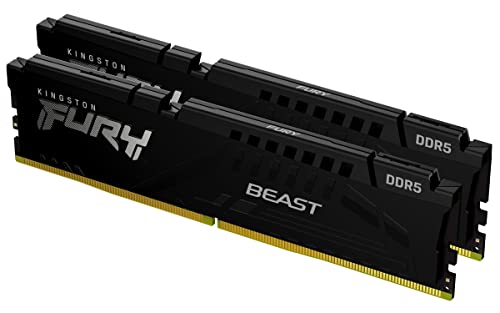 Kingston Technology’s Fury Beast memory kit is yet another simplistic memory kit designed for plug-and-play use, as well as providing better cost-to-performance.

5,200Mhz and CL40 is a bit of a step-down from Raptor Lake’s standard supported memory frequency, but it doesn’t represent significant losses to any system that uses this memory kit. In fact, even for a Core i5-13600K, the percentage losses are still considered very minimal, especially when equated with its very budget-friendly cost.

In fact, it becomes an even better deal for overclocking enthusiasts, as you can crank the values up to almost the baseline spec. CL timings can also be dropped down by a few notches, though not as dramatic as memory frequency increases. And all of that, without a single penny, invested more for its cost.

The aesthetic design of this RAM kit is a low profile including its heat spreader. Couple with its black color helps in making the memory sticks visually compatible with most PC builds out there that don’t require RGB memory. Though you could opt for the RGB version if you need more aesthetics.

If you are an SFF fan, you’re in for a treat with Kingston Beast Fury, as it can fit into any hardware configuration without the need to worry about clearances or distance margins. It should be perfectly unobtrusive even to the beefiest of downdraft coolers.

Crucial Desktop Memory modules are one of if not the cheapest gateway to DDR5 for the 13600K, but it comes at the cost of basic visuals.

Going barebones even further, this Crucial memory module forgoes the heat spreader design, and all default OC profiles to provide one of if not the cheapest DDR5 RAM kits for the i5-13600K on the planet. Yes, no OC profiles mean that it runs at the default 4,800MHz CL40 frequency and timings.

In order to use this memory kit at its full potential, it is basically mandatory for users to tweak its frequency and timings manually. Possibly a nightmare for those who hate wasting time on these things but is a heavenly blessing for OC enthusiasts and those who don’t want to pay higher costs.

As per our research, this Crucial memory is stable at 5,400Mhz. Still a bit lower than the baseline Raptor Lake spec of 5,600Mhz. But if the 5,200Mhz Fury Beast modules have proven anything, it’s that the performance gains start to go logarithmic when the margins become this close. Almost nothing was lost in performance, but everything to gain in price.

In the looks department, Crucial’s barebones design also doesn’t really look half bad. The black PCB works wonders in allowing it to fit seamlessly (both physically and aesthetically) to most builds without looking like an eyesore. Overall, this is a very good performing DDR5 RAM for the i5-13600K if you want DDR5 but are on a budget. 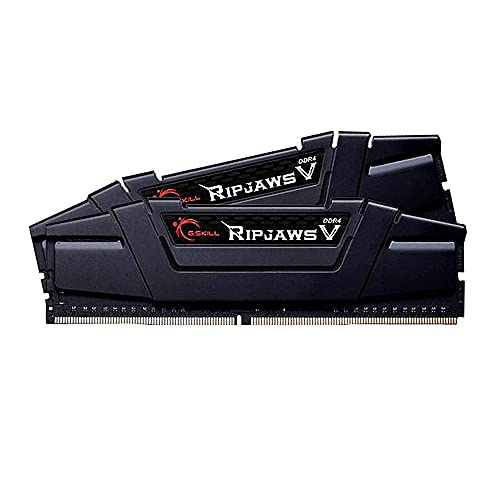 If DDR5 isn’t your thing, then G.Skill RipJaws V can still provide excellent performance and decent aesthetics to your Core i5-13600K system.

If Crucial’s DDR5 sticks are still too expensive for you, you can go one step down the technological scale for DDR4 instead. G.Skill RipJaws V series DDR4 memory kits offer the best very good performance, the balance of cost, and okay enough aesthetics for the i5-13600K without having to sacrifice frequency or timings.

Some users will urge tuning the timings further to get CL14 or even bump the OC higher to 3,600Mhz. But in the grand scheme of things, we believe this is largely unnecessary. 3,200Mhz CL16 is good enough for Raptor Lake using DDR4.

Additional tunings would probably make sense if you are into professional esports gaming. But the gains would not nearly be appreciable enough so long as you have a decent resizable-bar-supported GPU paired with the Core i5 13600K.

For its aesthetic evaluation, the RipJaws V series uses a tapered heat spreader design that perfectly houses the DIMM slots area when at least four of them are installed. It also comes in different color variants (black, red, blue), harkening back to a time when solid color themes, and not RGB, was the main focus of PC interior design considerations.

We are not sure how it performs as an actual heat (thermal) spreader, unfortunately. But, it should work fine given its material composition and the way it is installed on the memory stick.

The Core i5-13600K still supports both DDR4 and DDR5 memory. As such, if you can get a tremendously good deal, higher-end DDR4 should still be competitive enough to match DDR5’s general performance. That being said, if there is a relatively good enough economic option, we still highly recommend going with DDR5.

As per our standard recommendation, 16GB (x2 8GB) showcases the best balance of efficient capacity versus cost. However, if you can add a bit more funds, 32GB is already an efficient investment today, especially for the “pseudo-i7” Core i5 13600K. 64GB of capacity is most likely overkill for this CPU, however.

Raptor Lake lists its officially supported memory frequency at 3,200Mhz for DDR4, and 5,600Mhz for DDR5. Go for broke if you have the funds or don’t want to waste time messing with tunings. But keep in mind that manual memory overclocking to save costs is still an option.

If you are using DDR4 modules on the Core i5-13600K, CAS latency should be as low as the value possibly can be. For example, CL14 or CL16 for 3,200/3,600Mhz modules. If on DDR5, tighten it as low as you can, but don’t worry if it still looks quite high. Raptor Lake IPC performance margins and architectural gains will still fix things for you.

When optimized, dual-rank modules would generally outperform single-rank ones by a noticeable margin. But this comes at a cost to stability. Single-rank will OC better, and will have higher max values whenever four RAM sticks are used.

Dual-Channel is Better than Single-Channel

Always go for a minimum of two, then four RAM sticks for your system. Never use one or three, as you are essentially running at half the CPU memory bandwidth with a single-channel configuration.

Intel 13th Gen still supports DDR4 as it embraces DDR5 further. For lower-tier CPUs like the Core i5-13600K, this is a good thing. The cost will never be an issue since you can go back to cheaper RAM with the appropriate DDR-supported motherboard. But if you can forge ahead with DDR5, however, the investment becomes worth the future support that newer modules should eventually provide.